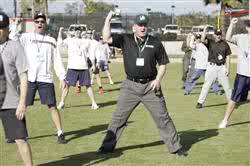 An Umpire is a person designated to enforce the rules of baseball during a game. In Major League Baseball, there are four umpires per game working as an umpiring crew. One umpire is positioned behind the plate (the home plate umpire) who is responsible for calling balls and strikes as well as plays at the plate, and one behind each of the bases (the base umpires) who are positioned to make calls on plays at their base, or in the outfield. The home plate umpire also has responsibility for keeping the official line-up cards; he is the only person who can determine if a substitution is legal or whether a batter is out of turn; he must be advised beforehand if a manager intends to make a double switch. During the All-Star Game and postseason games, two additional umpires take the field, positioned along the left and right foul lines in the outfield. Their main responsibility is to make calls on whether balls hit to the outfield are fair or foul, and whether balls have been caught on the fly or trapped. At lower levels, games can be umpired by three, two or even one official; in fact, in the early days of professional baseball, the one-umpire system was most common.

Umpires are not restricted to making calls at their respective bases, although one umpire usually defers to his colleague closest to the base. For example, all umpires can call a balk, as it may only be visible from one particular angle of view, or an ejection, since only one umpire may have overheard offending words or seen an offending gesture. On complex plays, umpires will often move to cover a different base and can end up making a call there, much like a player on defense will cover a base that is not usually his responsibility. It may happen that two umpires make conflicting rulings on the same play, in which case all the umpires will confer to make a joint decision. It is very rare that one umpire will overrule his colleague, and again this is usually after a short conference among all members of a crew.

In Major League baseball, Umpires work in four-man crews headed by a crew chief. Until the 1980s, they would work the whole season without taking a break. The Umpires' union staged a series of strikes beginning in the late 1970s that improved their working conditions, including giving each umpire paid vacations during the season, and bringing their salaries up to more respectable levels. Like players, umpires come up through the minor leagues after attending an umpiring school, or working college or amateur games. They start at the lowest levels - Rookie-level or short-season class A - and work their way up to AAA and eventually the majors. Promotions are supposed to be based on merit, and if an umpire fails to move up to the next level within a specified number of years, he (or she) is dismissed. It is therefore a very competitive process to reach the Major Leagues, although, once there, umpires tend to stay until they retire or are forced out for off-the-field problems. It is now exceedingly rare for former players to become umpires, although this was quite common until the 1950s or 1960s.

Umpires are usually dressed in uniforms in which the colors blue or black predominate, thus they are often known as either the Men in Blue or the Men in Black, although they have worn other types of clothing at different times in the past. The home plate umpire wears a mask similar to a catcher's mask, as well as a chest protector, now worn inside the shirt. In the American League until the 1980s, the home plate umpire used to wear a large "balloon-type" chest protector outside his uniform; this meant that his position behind the plate was different than that of National League umpires, who wore the inside chest protector. It was argued that as a result of this difference of equipment, AL Umpires called a higher strike zone than their NL brethren. These differences have disappeared as MLB now operates with one set of umpires, who all wear the same equipment. However, the strike zone tends to vary widely from one umpire to another, to a point where MLB tried to address the problem with technology: the Questec system was a laser sensor which determined whether the ball crossed the plate within or outside the strike zone. While Questec was not used to make decisions during a game, umpires whose rulings differ markedly from the "objective" decisions of the machine were considered by MLB to be under-performing. Not surprisingly, this system, introduced in 2003, proved to be controversial both with umpires and with pitchers who like to work the edges of the strike zone, and was faded out after the 2008 season. More sophisticated systems were developed in subsequent years and MLB came back to the idea of potentially introducing them into play by having the independent Atlantic League test out such a system in 2019.

The history of the position[edit]