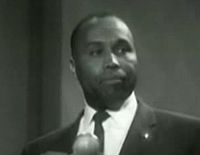 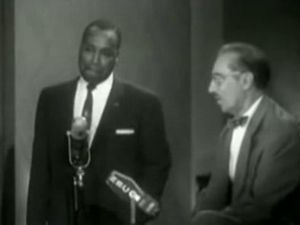 Ashford and Marx discussing baseball on "You Bet Your Life".

The first black umpire in the history of both organized baseball and Major League Baseball, Emmett Ashford began his umpiring career in the class C Southwest International League in 1951. He umpired his first game on July 7, 1951 behind the plate for a game between the Yuma Panthers and the Mexicali Eagles. He stayed in the SIL through July 22, 1952, then umped in the Arizona-Texas League from August 11th through the end of 1952. He moved to the Western International League in 1953 and worked the Pacific Coast League from 1954 to 1965.

On April 11, 1966, Ashford became the first black Major League umpire when he worked his first American League game. He remained an umpire until his retirement in 1970, following an appearance in the 1970 World Series; he also worked the 1967 All-Star Game. Ashford was a showy umpire, though he mellowed with age. He didn't become an umpire until he was 36 years old; previously he had worked for the postal service.

He was featured in an episode of "You Bet Your Life" with Groucho Marx in 1955 during which he talked about being an umpire.