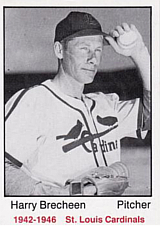 “For a little guy, Brecheen gets a lot on the ball. With the kind of control he’s got, he could thread a needle with the ball. He’s the nearest thing to Carl Hubbell... Hub had a better screwball, but I don’t think he threw that fast." - Dizzy Dean

Pitcher Harry Brecheen played a dozen years in the majors and was a member of the St. Louis Cardinals rotation for about a decade. He earned the nickname "The Cat" for his ability to field bunts, pouncing on them like a cat. One of the great left-handed pitchers in Cardinal history, Harry was a two-time All-Star and won 128 games in St. Louis.

Born and raised in Oklahoma, Brecheen began his pro career in 1935. He went 21-6 for the Portsmouth Cubs of the Piedmont League in 1937 and was then drafted by the Houston Boffaloes in the class-A1 phase of the 1937 Rule V Draft. He spent two years with Houston of the Texas League and, after a brief cup of coffee with St. Louis in 1940, was with the Columbus Red Birds of the American Association for three summers.

It was in 1943, in the middle of World War II, that Brecheen reached the majors to stay (having been classified 4-F during World War II due to a childhood injury and spinal malformation) That year, he went 9-6 with a 2.26 ERA while splitting time between the rotation and the bullpen. Mostly a starter in 1944, he went 16-5 and recorded a win in Game 4 of the World Series as the Cards downed their neighbors, the St. Louis Browns. After going 15-4 in 1945, his club reached the World Series again in 1946 when he was 15-15, 2.49 during the season. Facing the Boston Red Sox, he recorded 3 wins in 3 appearances in the Fall Classic, including a victory in the deciding Game 7, while posting a minuscule 0.45 ERA. He had his finest season two years later, in 1948, going 20-7 and leading the National League with a 2.24 ERA, 7 shutouts, and 149 strikeouts.

Brecheen set the Cardinals mark for strikeouts by a left-handed pitcher in 1951, passing Bill Sherdel (and ultimately being passed by Steve Carlton in 1971). Released by the Cards following the 1952 season, Brecheen spent his last year in the majors with the other St. Louis club, the Browns, in 1953. The team moved to Baltimore after that season, and he followed them, becoming the Orioles' pitching coach, a job he held for more than a decade, from 1954 to 1967.

A member of the Oklahoma Sports Hall of Fame and a 2018 inductee to the Cardinals team Hall of Fame, Brecheen died in a nursing facility at 89.