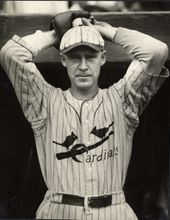 "As Ruth stepped back, Willie shot another pitch through the strike zone. It was a 'quick pitch', then legal in the National League, but Umpire Charlie Pfirman refused to call the Big Bam out because the quick pitch was barred in the American League. A wild scene followed . . ." - from an article in the July 1960 Baseball Digest about Willie Sherdel pitching to Babe Ruth in the 1928 World Series.

"Probably the most efficient relief pitching job ever was performed by Wee Willie Sherdel of St. Louis July 30, 1924. . . three outs on a single pitch in relief!" - from an article in the June 1977 Baseball Digest about Sherdel getting George Harper to hit into a triple play

Willie Sherdel pitched 15 seasons in the big leagues, winning 165 games. In 1925 he led the league in winning percentage, while in 1928 he won 21 games. Although saves were not an official stat at the time, Willie three times led the league in saves, twice while primarily serving as a starting pitcher.

Sherdel was born, and died in McSherrystown, PA, in central Pennsylvania. He attended and played for Hanover High School in PA. He pitched for the Hanover Hornets at ages 18 and 19 in 1915-16, and spent part of 1916 and also 1917 pitching for the minor-league Milwaukee Brewers. After he went 19-16 for the Brewers in 1917 he got his shot at the majors.

Willie came up in April 1918 with the St. Louis Cardinals and stayed with the team until he was traded (with Fred Frankhouse) for Hall of Famer Burleigh Grimes. Although Willie went only 6-12 in his first season, his 2.71 ERA was good enough to stick. He went on to win 15+ games six times with the Cards, and appeared in the 1926 and 1928 World Series (although he had a record of 0-4).

After the trade, Sherdel spent parts of three seasons with the Boston Braves and then finished up his major league career with a few more appearances with the Cardinals. He also pitched in 8 games for Rochester in 1932.

The Baseball Digest article quoted above stated that Willie was one of the "few smart controllers of soft stuff" in his day, relying on control, curves and a change-up.

The book Hanover Raiders has a chapter on Sherdel.

Sherdel's nickname was "Wee Willie" and he was often called diminutive. At 5 ' 10 " he doesn't seem short, but not all sources agree he was that tall. And he was listed at 160 lbs.

Sherdel holds the record for the most career home runs (9) by a player with a single-season high of 1.