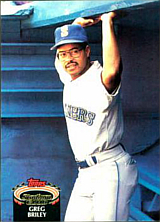 Pint-sized Greg Briley was signed after being picked in the secondary phase of the 1986 amateur draft by the Seattle Mariners and scout S.E. "Rip" Tutor. He played six big league seasons with the M's and Florida Marlins, batting .266 with a .442 slugging percentage and 13 home runs in 115 games for the 1989 Mariners. With the inaugural Fish squad, Briley pinch hit for Trevor Hoffman in Hoffman's big league debut.

Briley was schedule to return to the Voyagers in 2015 but back surgery put him out for the year. He was replaced by Justin Jirschele just before the Pioneer League season started in June.