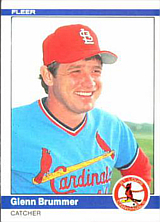 "The odd thing about the play was that there two outs and two strikes on the hitter. If the pitcher just throws a strike, the batter is out and the run doesn't score. So in that sense it was kind of a silly time for Brummer to do that. You don't try to steal home when there are two strikes on the hitter. But that's what made the play so nostalgic, because Brummer's nickname was 'Farm Boy'. He liked to play up the image he was a dumb kid off the farm. He was a hard-nosed player and he was going to run you over if you got in his way. So this play kind of fit into that image of Brummer." - Tommy Herr, to Peter Golenbock, The Spirit of St. Louis

Glenn Brummer's first professional season was 1974 with the GCL Cardinals in Sarasota, FL. In 24 games, he hit .290, with no homers, 7 RBI and 5 stolen bases. He was a backup catcher in five big league seasons who first reached the majors in 1981.

Brummer remains famous for pulling off a daring steal of home in the 12th inning of a game against the San Francisco Giants on August 22, 1982. With the St. Louis Cardinals in a pennant race, he singled with one out against Gary Lavelle, moved to second base on Willie McGee's single and then to third on Ozzie Smith's two-out single. With the bases loaded and David Green at the plate, he caught everyone in the ballpark by surprise by heading for home and making it safely, giving the Cards a 5-4 win. That was one of only 2 stolen bases for Brummer that season and 4 in his career. He made a brief appearance in the 1982 World Series, catching the 9th inning of Game 6 as the Cards stomped the Milwaukee Brewers, 13-1.

Brummer was the Cardinals' third catcher from 1981 to 1984, backing up Darrell Porter and Gene Tenace, who were getting on in years and no longer particularly good defensively. Brummer was very good on defense, but was used only sparingly. He never amassed 100 at-bats during those four seasons. The Cardinals released him at the end of spring training in 1985 and the Texas Rangers picked him up. He served as a backup to Don Slaught alongside Geno Petralli in 1985 and had his busiest season. He got into 49 games and batted .278, both career highs, in his last year in the majors. In 1989, Brummer played for the Winter Haven Super Sox of the Senior Professional Baseball Association. He played 22 games and batted .185.

Brummer was a coach for the Clearwater Phillies in 1996 to 1998, Arkansas Travelers in 1999, Potomac Cannons in 2000, and Charlotte Rangers in 2002. His brother, Tom, was an infielder in the Boston Red Sox chain.