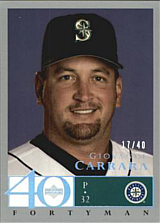 Giovanni had an extensive international career. First, he pitched for Venezuela in the 2006 WBC, allowing back-to-back home runs to Cuba in the first game of the second round. A year later, he was on the Italian national team in the 2007 European Championship, pitching 7 scoreless innings in a win. He struck out 8, walked none and allowed three hits. The Netherlands protested Carrara's presence but the Technical Commission rejected the complaint. The Venezuelan Federation and Venezuelan Olympic Committee had given permission for Carrara to play for Italy and Carrara's birth certificate showed that he was an Italian citizen.

In the 2008 Caribbean Series, Carrara was 1-0 and allowed no runs in five innings for the Tigres de Aragua. In the 2008 European Cup in Regensburg, he was 1-0, allowing 3 unearned runs in six innings in an upset of DOOR Neptunus. He scraped out two saves to help Nettuno win the 2008 European Cup Final Four, but allowed a .333 average. He was 1-0 in the 2009 European Cup's Nettuno phase, fanning 5 in 3 shutout innings and beating the Rouen Huskies. In the Cup's Final Four, he tossed 3 1/3 shutout innings in relief of Carlos Richetti to get the win over Kinheim, bringing Nettuno to the finals, where Jeff Farnsworth got them the title with an even brighter gem.