George Mullin was a star pitcher for the Detroit Tigers during the first decade of the team's existence. He was born and grew up in Toledo, OH, but began playing semi-pro ball in Indiana, including in the town of Wabash, IN where he would settle and which gave him his nickname. He signed his first professional contract with Fort Wayne of the Western Association in 1901, pitching 367 innings with a record of 21-20. After the season he signed with the Brooklyn Superbas of the National League, then immediately broke the contract to join the Detroit Tigers who offered him more money (the National League and the American League were still openly at war at that time, and refused to respect each other's contracts).

Mullin made his debut on May 4, 1902 against the Chicago White Sox. He gave up nine runs in 8 ⅓ innings but was not involved in the decision, and did hit three doubles. He was always a good hitter, ending his career with a solid .262 batting average and playing a number of games in the field over the years. He finished his rookie campaign with a 13-16 record in 30 starts, and hit a career-high .325. In 1903, he improved to 19-15, 2.25 but led the league with 106 walks allowed. He would lead the league every year until 1907, in part because he was also always among league leaders in innings pitched. He pitched a league-leading 347 ⅔ innings in 1905, a year when he won 20 games or more for the first of three consecutive seasons. He also lost 20 games twice - in 1905 and 1907. 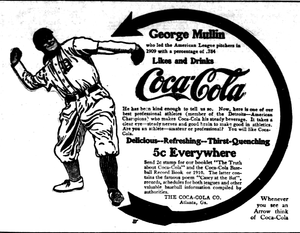 The Detroit Tigers made it to the World Series for three consecutive seasons from 1907 to 1909, coming on the losing end each time; Mullin was among the mainstays of their pitching staff all three seasons and featured prominently in all the Series. In 1907, he started and lost two games against the Chicago Cubs in spite of a 2.12 ERA, then he notched the Tigers' only win in the 1908 World Series, beating the Cubs 8-3 in Game 3. In 1909, he was the staff ace, posting an 11-game winning streak to start the season and finishing 29-8, 2.22, while pitching 303 ⅔ innings. He started and lost Game 1 of the 1909 World Series against Babe Adams and the Pittsburgh Pirates; he then beat Lefty Leifield with a 5-hit shutout in Game 4 to even the Series at 2 games apiece, and won Game 6 by the score of 5-4 to make it 3 each. In the decisive Game 7, he relieved Wild Bill Donovan in the 4th inning and pitched the remainder of the game, but the Tigers were beaten 8-0. Still, he pitched 32 innings in the 7-game series (a record which still stands) and posted an ERA of 2.25.

George Mullin continued to pitch well for a few more years, going 21-12 in 1910 and 18-10 in 1911. In 1912, he fell to 12-17. He was placed on waivers in June, but went unclaimed, and on July 4th, he pitched a no-hitter against the St. Louis Browns in the second game of a doubleheader. Ha also turned 32 that day, and it is the only time in major league history that someone has pitched a no-hitter on his birthday. He returned to the Tigers in 1913, but started the year 1-6 and was sold to the Washington Senators. He was 3-5 for his new team and then was assigned to the Montreal Royals of the International League to complete the season. In 1914, he jumped to the newly-formed Federal League with the Indianapolis Hoosiers for whom he went 14-10. He then pitched briefly for the Newark Pepper in 1915, going 2-2, and finished his baseball career as a coach and occasional player for various minor league teams from 1915 to 1921.

George Mullin had an excellent fastball and a solid curveball. He was a big man for his time, at 5'11" or 6'0" and 188 lbs. at his lightest. He was subject to bouts of wildness - his league-leading walk totals attest to this - but would also play mind games with hitters, walking off the mound to adjust a shoestring or tightening or loosening his belt, talking to batters, to himself and to fans, and otherwise attempting to distract opponents. He still holds a number of Tiger franchise records, including most games started, most losses and most innings pitched in a season.

George Mullins' main teammates included Sam Crawford (6324) and Ty Cobb (5726). The most similar player according to similarity scores was his contemporary Vic Willis, a Hall of Famer who was on the opposing team in the 1909 World Series.

After his baseball career, he returned to Wabash where he was a police officer. He died there in 1944.