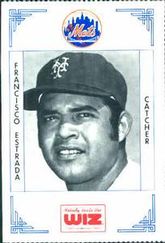 Catcher Frank Estrada was traded with Nolan Ryan to the California Angels, but his only major league time consisted of a single game for the New York Mets in 1971. During a 30-year pro career, however, "Paquín" was behind the plate for roughly 4,000 games. That is far more than anyone else in pro baseball history.

In his only major league appearance, on September 14, 1971, he replaced Mets regular catcher Jerry Grote with his team trailing 12-0 in the 6th inning of the first game of a doubleheader against the Montreal Expos. He caught the remainder of the game and went to bat twice, singling off Bill Stoneman in first at-bat, and then grounding out to first base to end the game in the bottom of the 9th. He thus has a career major league batting average of .500. He allowed a passed ball in four innings behind the plate in becoming the first Mexican catcher in major league history.

In 2000, he was selected to Mexico's Salon de la Fama as a player, but he is also the most successful manager in his nation's history.

On March 2, 2017, Estrada was reported missing by Mexican baseball officials. He was slated to manage the Mexican national team in the 2017 World Baseball Classic, due to begin a few days later, but his whereabouts were unknown. There were fears of a relapse of medical problems, as he had recently undergone heart surgery. He was found but his health problems persisted and in November 2019, he was hospitalized again in his hometown to undergo heart surgery. However, he experienced various setbacks after the procedure and died in hospital on December 9th, at the age of 71.

His brother Héctor Estrada also played and managed in Mexico.