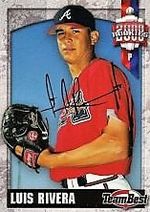 Luis Rivera, prior to being signed as an undrafted free agent by the Braves in 1995, attended Colegio Entelecheia Preparatoria Abierta de Toluca.

He began his professional career in 1996 with the GCL Braves, not playing in American baseball in 1995 because he was loaned by the Braves to the Mexico City Tigers. With the GCL Braves in 1996, he went 1-1 with a 2.59 ERA.

In 2000, he was ranked the 51st best prospect in baseball and the fifth best prospect in the Braves organization. He began the season on the Braves' Opening Day roster, making his big league debut on April 4th. He made 5 relief appearances for the Braves, going 1-0 with a 1.35 ERA in 6 2/3 innings of work. He spent time with the GCL Braves and Richmond Braves that year too, going a combined 0-3 with a 6.82 ERA.

On July 31st, he was traded with Trenidad Hubbard and Fernando Lunar to the Baltimore Orioles for Gabe Molina and B.J. Surhoff. He appeared in only 1 game for the Orioles, allowing a walk and a hit in 2/3 of an inning on September 20th. He also appeared in 3 games with the Rochester Red Wings, going 0-1 with a 3.38 ERA.

Although he was ranked the fifth best prospect in the Orioles organization in 2001, he did not play at all that year or in 2002. On April 3, 2003, he was released by the Orioles.