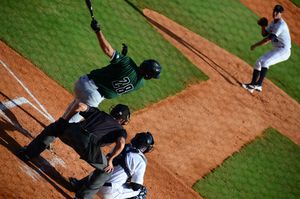 Evan Rutckyj has been a minor league pitcher.

Rutckyj (pronounced ROOT-ski) was drafted by the Windsor Spitfires of the Ontario Hockey League while in high school. He also pitched for the Canadian Junior National Team in the 2009 Summer International Series, with a 6.75 ERA and six walks in four innings. Baseball America rated him as the #99 high school prospect entering the 2010 amateur draft, third among Canadians behind Kellin Deglan and Evan Grills. The New York Yankees took him in the 16th round of the 2010 amateur draft, one round before Preston Claiborne. The tall Canadian tossed one shutout inning for the GCL Yankees that summer.

He opened 2015 with Tampa and was doing well in relief when he joined Team Canada for the 2015 Pan American Games. He pitched two games (two IP) with 3 strikeouts, one hit, one walk and no runs while Canada won the Gold Medal, joining Cuba as the only country to win multiple baseball Golds in the Pan American Games.