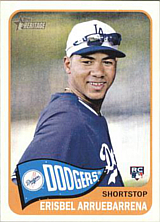 Arruebarrena was the starting shortstop for the Cuban national team at the 2013 World Baseball Classic, where he batted .375 in 6 games. In the fall, he defected and established residency in Haiti, then began working out in the Dominican Republic, after having petitioned Major League Baseball to be declared an international free agent. On February 12, 2014, he signed a preliminary contract with the Los Angeles Dodgers, although details were awaiting a physical exam and outstanding legal and immigration issues. His was the third prominent signing of a Cuban player by the Dodgers in a short span, following those of Yasiel Puig and Alex Guerrero. The signing was confirmed on February 22nd, with the contract being worth $25 million over five years. It took him another three weeks to be able to report to his new team, arriving at the Dodgers' spring training complex on March 13th.

Erisbel began 2014 with the AA Chattanooga Lookouts, batting .208 in 25 games before getting the call to the majors on May 23rd when Juan Uribe went on the disabled list (Guerrero, who was playing in AAA and hitting very well, would have gotten the call, but he was the victim of a freak injury a few days earlier when teammate Miguel Olivo bit his ear during a fight in the dugout, putting him out of action). Erisbel was in the starting lineup at shortstop against the Philadelphia Phillies on the day of his call-up and went 0 for 3 with 3 strikeouts and a walk in a 2-0 win; there was not a single ball hit his way all game. He hit .308 in 6 games before being sent down, this time to AAA. He hit a lot better with the Albuquerque Isotopes than he had with Chattanooga, putting up a .357 average in 20 games before getting the call back to Los Angeles on July 3rd. Carlos Triunfel had been filling in as the spare infielder at the major league level in the meantime. In total, he played 22 games for the Dodgers, hitting .195 with only one extra-base hit, a double. When he returned to the minors, he started a fight when he 'showed up' his opponents after hitting a home run, then the next day got into a shoving match with the opposing team's catcher. The Dodgers punished him by sending him to Class A ball for an attitude adjustment. He played 12 games with the Rancho Cucamonga Quakes, hitting .245. He only played 68 games in total in the minors, hitting .259 in 247 at-bats, in addition to his 41 at-bats in the big leagues.

On December 31, 2014, in an unexpected move, he was designated for assignment by the Dodgers in order to make room on the roster for newly-signed free agent pitcher Brett Anderson. The plan was for the Dodgers to send him outright to AAA: because he had $22 million left on his contract at that point, it would have been costly for another team to claim him off waivers. With no takers, he remained in the Dodgers organization beginning the 2015 season in extended spring training in Arizona. On May 21st, the Dodgers suspended him for the rest of the season "for repeated failures to comply with his contract." He played a total of 53 minor league games, hitting .299. In 2016, he played just 17 games with the AA Tulsa Drillers, hitting .182 with 4 homers, then was placed on the restricted list again, staying there for the remainder of the year. In 2017 he was on a rehabilitation assignment with the AZL Dodgers in July, where he hit .519 in 8 games, but he never played at a level more appropriate to his experience. He was released in July 2018.