Inducted into Hall of Fame in 1946

Ed Walsh of the Chicago White Sox was one of the top pitchers in the first decade of the American League and holds the record for the lowest lifetime ERA with a career earned run average of 1.82.

Walsh threw what was probably the most devastating spitball in baseball history, which he learned from teammate Elmer Stricklett. Big Ed's spitter had fantastic movement, but he was still able to throw it with outstanding control. He estimated that he would throw the spitter as much as 90% of the time.

Walsh joined the Sox in 1904, and in 1906, he led the AL with 10 shutouts, but is the only pitcher in history with that many shutouts in a season who failed to win 20 games (he finished 17-13). In August, he had a streak of allowing just 1 run in 60 innings. His heroics that year continued into October, as he won 2 games, struck out 17, and only allowed 1 earned run in 15 innings in his team's World Series victory over the Chicago Cubs. The next year, 1907, the Sox struggled to score in Walsh's starts, but he still went 24-18 with a 1.60 ERA. 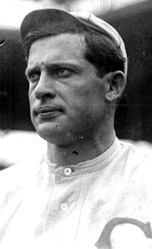 Walsh had his greatest season in 1908, going 40-15 with a 1.42 ERA. Along with Jack Chesbro's 41 wins in 1904, his 40 wins are the only 40-win seasons since 1900, and he is therefore the last player to have a 40-win season. He also led the AL in starts (49), complete games (42), shutouts (11), strikeouts (269), and innings (464, the last pitcher to throw over 400 innings in a season). The 269 strikeouts were a White Sox team record until topped by Chris Sale in 2015. In fact, until Sale came along, Walsh had the top four strikeout seasons in team history. However, he lost what might have been his best game that season: in an October 2nd contest against the Cleveland Naps, he struck out 15 but lost to Addie Joss, who threw a perfect game. In addition to his work as a starter, he was the White Sox's go-to guy for late-inning relief, as he appeared in a total of 66 games as a pitcher. That was the major league record until Ace Adams, a full-time reliever, appeared in 70 games for the 1943 New York Giants; even more amazing was that no one topped his total in the AL until Ellis Kinder had 69 games pitched for the 1953 Boston Red Sox. In spite of that extremely heavy workload, he was awesome in September, with an ERA of 1.31 in a whopping 130 1/3 innings during the months - in the middle of a very tight pennant race to boot! He pitched 6 shutouts during the month, matching his own record from August 1906 (a teammate, Doc White, had also thrown that many in September of 1904).

There is a feeling that Walsh never did much of anything after his outstanding 1908 season, but in fact, he continued to pitch very well even if his record doesn't always reflect this. In 1909, his rate stats were almost the same as in his career year - but in exactly half the time spent on the mound. His ERA was 2.03 and he went 15-11 in 31 games and 230 1/3 innings. In 1910, Walsh became the only pitcher ever to lose 20 games but still lead the league in earned run average as he went 18-20 with a 1.27 mark. He bounced back, winning 27 games in 1911 and 1912, but struggled with arm injuries afterwards, playing in only 33 games over the next five years before retiring in 1917. 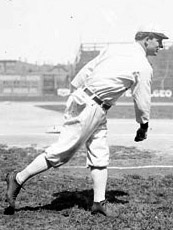 Walsh was also known for his defense, setting several fielding record during his career. He also helped to design Comiskey Park, possibly one reason that it played as a pitcher's park.

After his playing days, Walsh was a member of the Sox coaching staff for several years and managed the team briefly in 1924. He was also an American League umpire during the 1922 season and the baseball coach at University of Notre Dame in 1926.

Walsh's son Ed also later played for the Sox for several seasons but did not duplicate his father's success.

Walsh died on May 26, 1959, the same day that Harvey Haddix of the Pittsburgh Pirates pitched 12 perfect innings before losing to the Milwaukee Braves. 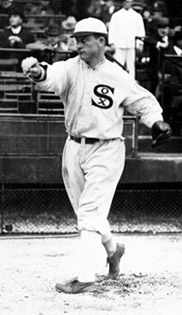