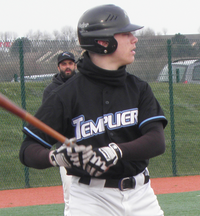 Dylan Mayeux is an infielder in Division Elite. He was 4 for 38 with four walks, 15 strikeouts and five errors for the Cougars de Montigny in 2011. Mayeux spent the 2012 season with the Templiers de Sénart, playing regularly for the club at age 17. He is part of the French junior national team program; in the 2012 European Junior Championship Qualifiers, he hit .316/.400/.579 as France's first baseman with 7 runs and 10 RBI in 5 games. Only Théo Brelle had more RBI in the qualifiers. He attended the MLB European Academy in 2012.

Mayeux was the starting second baseman for Sénart in 2012 and 2013. In 2014, he moved to shortstop after French national team veteran Florian Peyrichou joined the squad and took over second base.

Even though Mayeux is one of France's best young players, holding his own against much older competition, his younger sister Melissa Mayeux has received as much attention, if not more, than him.

This biographical article is missing the person's: birth place
Retrieved from "https://www.baseball-reference.com/bpv/index.php?title=Dylan_Mayeux&oldid=872177"
Categories: