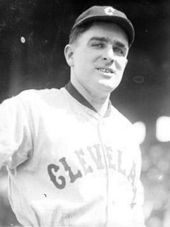 A long-time minor leaguer, Duster Mails was briefly famous as a star on the 1920 Cleveland Indians that won the 1920 World Series, as well as in 1921 when he went 14-8. He was plagued with arm problems much of his major league career, however.

Duster was only 20 when he came up for his first cup of coffee with the Brooklyn Robins in 1915. Teammate Casey Stengel was 24 at the time.

Mails had this to say about the source of his nickname "Duster", from the time when he was a raw rookie with the Dodgers:

"I didn't deliberately try to dust them off. I simply couldn't make the ball go where I wanted it to go. Any batter who faced me then did so at his own risk. But I was wild, not from choice, but because I couldn't help myself."

Mails was not in the majors in 1917-19, but came back with the Cleveland Indians from 1920-22 after being purchased from the PCL, where he had been with the Sacramento Solons in 1919 and 1920. He was a sensation in the 1920 World Series, pitching 15 2/3 innings, and giving up zero runs. He got the victory in Game 6 of the Series before teammate Stan Coveleski got the win in the final game.

Mails must have had a long minor league career, because Lefty Wight says he learned his low three-quarters delivery from Mails at Kansas City in 1933. Wright also says that Mails had a great pick-off move to first.

In 1938, Mails pitched in an old-timers' game that reunited many members of the 1920 Cleveland Indians. Mails pitched well. He was at the time running for sherriff of Marin County, CA, and was working in public relations for the San Francisco Seals.