Ted "Double Duty" Radcliffe, an expert at self-promotion, appeared in the Negro Leagues' East-West Game three times as a catcher and three times as a pitcher. A childhood friend of Satchel Paige, he was part of a battery with Paige in five different decades. He was the 7th of 10 children; younger brother Alex Radcliffe was also a Negro League star. Known for his strong right arm, Double Duty Radcliffe was a low-OBP batter with some power. In 1948, Radcliffe walked just twice in 189 AB.

Radcliffe spent the first several years of his baseball career playing semipro baseball, mostly with the Illinois Giants. In 1926 he briefly joined the Detroit Stars but didn't appear regularly till '28. That year he posted the second-lowest average of any Detroit starter, but his 8 homers were tied for 5th in the league. Detroit used a homer-friendly park, though - 4 of the league's top 7 were from the Motor City. Radcliffe was initially used primarily as a catcher by Bingo DeMoss, not yet a two-way player.

A year later Radcliffe went to the St. Louis Stars and became a two-way star. He was 9-3 on the mound and hit .293 as a backup in the field. His 2.80 run average was the best in the Negro National League and he was fourth in won-lost percentage as the Stars won the title. As a pitcher Radcliffe was known as a specialist of doctoring baseballs, a guy with good control who could throw. 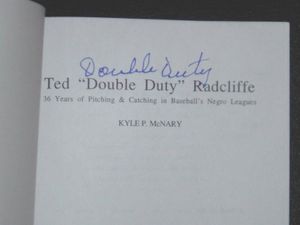 Radcliffe split '31 between several league and non-league teams. In '32, he was with the Pittsburgh Crawfords. He hit .279; again his arm was much better than his bat as he went 15-9, tied for 4th among Negro League teams (Pittsburgh was not in the league) in wins. Three of the four pitchers with more or as many victories was a teammate on Pittsburgh at some point that season and all three with better records posted better RAs as Radcliffe was the low man on a great pitching staff featuring Paige, Harry Salmon, Sam Streeter and William Bell.

In 1932 Radcliffe also got married; this marriage lasted till 1940; he remarried shortly thereafter. His second marriage lasted over 55 years. This doesn't mean that Radcliffe was a model of fidelity. He bragged about his immoral lifestyle, saying he slept with two women a day. Throughout interviews, he would repeatedly bring up his numerous affairs, apparently finding pride in this behavior. He spent almost as much time bragging about his adultery as he did about his baseball career (which he did quite a bit).

Another important milestone for Radcliffe came in '32. In a game at Yankee Stadium, Damon Runyon saw Radcliffe hit a grand slam to win the opener as Paige's catcher, then pitch a shutout in game two. Runyon gave Radcliffe his "Double Duty" nickname that was used from them on as he no longer went by Ted. People either called him Double Duty or Duty.

Radcliffe was at a point in his career where he begun playing for several teams a season; famed for deserting his teams in favor of more and more money, he first began playing on integrated teams in '34 when he appeared for the Bismarck Churchills. He was the manager of the team, becoming perhaps the first black manager of an integrated baseball team.

Radcliffe, as expected, dominated semipro competition consisting of a couple old and faded major league has-beens and plenty of never-weres. He was 17-3 in 1934 for Bismarck's rival, the Jamestown Red Sox and batted .355. he was 4-0 for Bismarck in '35 and hit .309 with 2 HR in 81 AB. He was outperformed by white teammates who never made it to AA as once again his offense left a lot to be desired.

He played in his first East-West game in '37, going 0 for 3 as the starting catcher for the West.

In 1938 Radcliffe began his longest tenure with a Negro League team, the Memphis Red Sox. As player-manager, he hit only .235 and went 3-4 for a good club, but his 2.31 run average led the league, the second time he had done so. He would lead the league in a surprising stat in '39 - the catcher who turned 37 that year hit 3 triples, part of a 4-way tie for the top spot. He hit .194 in the Cuban Winter League but was 7-3 on the mound in winter ball. He also pitched 4 shutout innings of relief in the East-West game. The next year he again relieved in the East-West and won as his team rallied late.

Radcliffe returned north in 1941 and continued to bounce from team to team as a .250 or less hitter and rarely used pitcher. He continued to make East-West appearances, as a reliever in 1941 and as a catcher in 1943 (going 0 for 3) and 1944 (2 for 4 with a homer). He managed the Chicago American Giants briefly, went to the Birmingham Black Barons for a few years, then the Homestead Grays for a few more. In addition to managing, pitching and catching, Radcliffe frequently drove the team bus over the years.

In 1944 Radcliffe also served 9 months as a cook in the army but due to asthma he was discharged.

In 1948 Radcliffe, no longer able to play in the top tiers of baseball, returned to semipro baseball yet again. He integrated two semipro leagues that year; he led the South Bend Studebakers of the Michigan-Indiana League with 7 homers and 34 RBI, batting .312; he had no decisions on the hill. Radcliffe called a home run one time that year.

By 1950, Radcliffe was back with the Chicago American Giants. The team had begun to sign white players, again making Radcliffe the manager of an integrated team. Radcliffe had a run-in with Bull Connor of Birmingham that year, who refused to let the integrated Negro League team play in Rickwood Field.

Radcliffe finished his 36-year career by playing four years in the Manitoba-Dakota League, an integrated league loaded with Negro League veterans too old for the majors to be interested. Radcliffe continued to play in this league till he retired at age 52 due to knee problems.

Radcliffe's career showed a good deal of success in semipro leagues and also against white major-leaguers, but his Negro League stats are nothing to write home about. Primarily a defensive force as a catcher, it is questionable if he could have hit well enough to play that position regularly in the majors. As a two-time leader in run average who also finished in the top 5 in wins another season, it appears pitching was his stronger suit; on the other hand, he was horrendous on the hill in the Mexican League.

While Radcliffe was hardly a superstar as a player, he is unique in the annals of baseball for his fine two-way work. How many other players were All-Stars multiple teams as both a pitcher and catcher?

Radcliffe, who had such a long career, had a remarkably long life, remaining active into his 90s. In fact, at age 96, he became the oldest man ever to appear in a professional baseball game, throwing one pitch for the Schaumburg Flyers of the Northern League in 1999. Radcliffe passed away in 2005 at the age of 103.