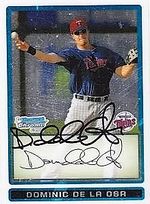 Dominic de la Osa was an All-American outfielder who only lasted two years in the minors.

That summer, the Floridian had a .270/.358/.355 batting line for the Wareham Gatemen of the Cape Cod League. He was named an All-League utility man alongside Josh Donaldson. In the 2007 collegiate season, Dominic produced at a .378/.452/.727 rate with 20 home runs, 23 doubles, 62 RBI, 65 walks and 20 steals (in 26 tries) in 66 games. He led Vanderbilt in steals, homers and slugging (beating out Pedro Alvarez in the latter two departments). De La Osa tied for 9th in NCAA Division I in homers (even with Matt LaPorta and three others) and was 16th in slugging. He was two home runs behind Southeastern Conference leader Justin Smoak. He was one of only three players in the country to go 20-20. He made first-team All-SEC in the outfield, though LaPorta got Player of the Year honors. He was named first-team All-American by both Collegiate Baseball and the American Baseball Coaches Association. Baseball America named him second-team, picking Grant Desme, Kellen Kulbacki and Kyle Russell as their first team outfielders. Detroit again picked de la Osa, but only in the 10th round of the 2007 amateur draft. He decided not to sign and returned for his senior year.

Minnesota assigned him to the Elizabethton Twins, a relatively low start for a player who just completed his senior year in college. Dominic hit .263/.384/.394 with 37 walks and 50 runs in 59 games. He led the Appalachian League in walks and runs as well as errors by a second baseman (12), helping Elizabethton take the Appy pennant.

De la Osa had a miserable 2009 with the Beloit Snappers, hitting just .205/.283/.251 with 8 steals in 13 tries and one home run in 106 games. He drew four fewer walks than with the 2008 Twins despite playing 47 more games. In a utility role, he played all four infield positions as well as all three outfield slots. Minnesota let him go the next year.