“Mr. A.J. Bushong, formerly catcher of the Mutuals, has signed with the Buffalo club for the season of ’78. We think the Buffalos could not have done better. All who saw Mr. Bushong play here, and compare his playing with the catchers who visited us, acknowledge that he was not surpassed in that position.” - Janesville Gazette, October 1878 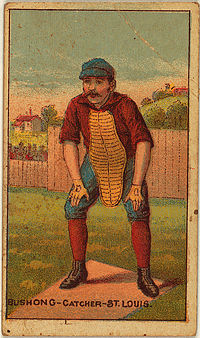 Doc Bushong was the first player from the Ivy League's Penn to come to the major leagues. He did not play baseball at the university, instead earning his degree in dentistry, and after his major league days was a practicing dentist. Many big league players are remembered with the name "Doc", but Bushong was the first. The town of Bushong, Kansas [1] was named in Bushong's honor. 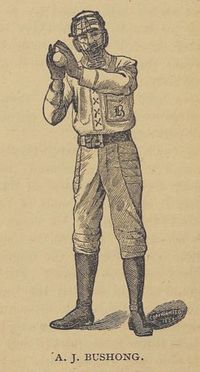 Bushong played catcher at a time when catchers took a beating from pitched balls. Nevertheless, he had a long career (for the times) in the majors. He started at age 18 with one game in the National Association in its final season (1875), and then played five games in the first year of the new National League. He did not come back to the NL until 1880. In the latter part of his career, he played on quite a few pennant winners and was in postseason play five times, perhaps most notably when his St. Louis Browns of the American Association beat Cap Anson's Chicago White Stockings of the National League in 1886. He was also regularly called upon to umpire games, working a total of 12 between his first, in the NL in 1880, and his final, also in the NL, in 1890.

The book The Beer and Whisky League has a photo of Doc along with an explanation of why he wore a mustache - he claimed that shaving caused his eyes to tear up, which affected his vision during games. Both Doc and Henry Chadwick died in Brooklyn during the 1908 season.