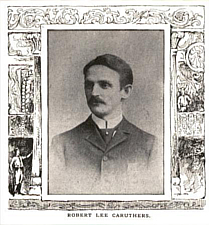 Bob Caruthers was a 19th century star and one of the greatest players in the history of the Major League American Association. Bob excelled as both a pitcher and outfielder and was probably the greatest two-way player in the history of the majors. Some have advocated for his inclusion in the Hall of Fame but several arguments can be made against his candidacy. Until Bid McPhee, no player who spent the bulk of his career in the American Association had been enshrined as the league was of lower quality than the National League. Additionally, Caruthers had a short career (10 seasons) and his primary offensive skill, OBP, was undervalued until recently.

Caruthers started his major league career as a late season call up for the St. Louis Browns in 1884. He pitched effectively, going 7-2 with a solid 2.61 ERA. He also played 16 games in the outfield, and on six occasions was moved from the field to the mound to finish another pitcher's game. Browns' manager Charles Comiskey must have liked what he saw, because he made Caruthers the Browns' top starter for 1885. Bob responded with a stellar season, leading the league in ERA (2.07), wins (40), and winning percentage (.755) in leading the Browns to their first AA pennant. The Browns faced Cap Anson's NL champion Chicago White Stockings in a postseason series. The results were inconclusive, with the final outcome a 3-3-1 tie, though the Browns claimed to have been cheated by biased umpiring in Game 3.

In the 1885-1886 offseason, he became "Parisian" Bob, staging an unusual trans-Atlantic holdout, negotiating with Browns owner Chris Von der Ahe from Paris, France via telegram. His holdout had no effect on his pitching, as he turned in another superb season in 1886, with a 2.32 ERA, 30 wins, and a .682 winning percentage. Those figures were not good enough for tops in the AA as his teammate, Dave Foutz, led all three areas. Caruthers added to his pitching success with an outstanding season at bat. He led the Browns with a .334 batting average (good for 4th in the AA), a league leading .448 OBP, and a .527 SLG that missed the league lead by a fraction of a percent. With that kind of pitching and hitting, the Browns won their second consecutive pennant easily, and went on to face the White Stockings in a rematch of the previous season's postseason exhibition. The dispute over the 1885 Series had led to bad blood between the teams, and Anson agreed to the series only on the condition that there be no sharing of the gate receipts; the winner would take them all. Caruthers pitched three games with varying results. After the White Stockings' John Clarkson bested the Browns with a five-hit shutout in Game 1, Caruthers answered in Game 2 with a two-hit, 8-inning shutout to even the series. Called to pitch again without rest in Game 3, Caruthers bombed, losing 11-4, again in a game called after 8 innings. Foutz and Nat Hudson took Games 4 and 5 for the Browns, leaving Caruthers to take the mound against Clarkson in Game 6. He gave up single runs in the 2nd, 4th, and 6th innings to fall down 3-0, but the Browns bounced back to even the score in the 8th. Clarkson and Caruthers matched zeros in the 9th, sending the game into extra innings. The White Stockings were unable to score in the 10th, but the Browns were, as Curt Welch stole home in the "$15,000 slide" to give the Browns the championship.

The Browns continued their dominance in 1887. Caruthers led the league in winning percentage as a pitcher, but that reflected the Browns' now dominant hitting as much as his pitching skill. Outfielder Tip O'Neill led the Browns - and the entire AA - in just about every hitting category: average, OBP, SLG, doubles, triples, home runs, runs scored, and RBI. The rest of the team followed his lead; both Caruthers and Foutz played in the field while not pitching and managed to place in the top 10 in the league in average, OBP, and SLG, and most of the regular starting lineup managed to finish in the top 10 in at least one offensive category. The postseason was a disappointment. Caruthers pitched acceptably, going 4-4 in his 8 complete games, but the Browns failed to hit well and went down 10 games to 5 in a 15-game series. Von der Ahe was furious at the Browns' poor play, which he blamed on their carousing and card playing, and decided to rid the team of troublemakers. Caruthers, who was a poker and billiards shark, became one of his targets and was dealt to the Brooklyn Bridegrooms, with Foutz and catcher Doc Bushong. While the Browns managed to hold on and win the 1888 AA pennant, it was in the face of stiffer competition than previous seasons, primarily from Caruthers's |Bridegrooms (the Brooklyn team received the nickname when several players were married that year). In 1889, Brooklyn finally took the pennant. Caruthers was not called on to play the outfield much, but he returned to the top in pitching, leading the league with 40 victories and a .784 winning percentage. He did not do so well in the postseason series against the NL champion New York Giants, losing his only two decisions in a 3-6 series drubbing.

In 1890, Brooklyn switched leagues, jumping to the more prestigious National League. Though the NL was supposed to be stronger than the AA, you could not tell from Brooklyn's performance; they won the pennant in their new league (although the NL's talent was depleted because a large number of star players had left the NL to join the Players League). Caruthers' contribution was less than it had been, as he was now the third pitcher on the staff, and got into just 39 games as an outfielder. He worked the outfield even less in 1891, and his pitching slipped a bit further, as he failed to reach 20 wins or 300 innings for the first time since becoming a regular pitcher. He was sent back to the Browns, who were now part of the consolidated NL and AA, in 1892. His pitching effectiveness collapsed completely that year; he threw just over 100 innings that was about 100 too many for the good of the Browns. Like many of his contemporaries, the enormous pitching workloads he had been asked to carry simply wiped out his arm.

Unlike most of those contemporaries, he had his outfield skills to fall back on, and he moved to the field essentially full-time. In 1893 he got into just a handful of games - 1 with the Chicago Colts and 13 with the Cincinnati Reds - before being sent to the minors. He was still a productive batter, but his key skill of drawing walks was under appreciated. In 1894, he hit .331/~.390/.464 for the Grand Rapids Rippers as a first baseman. While the numbers look impressive, it was about a league average performance in the high-octane 1894 Western League campaign. On May 17, 1896, he became manager at Burlington / Western Association. He continued to play in the minors until 1898 before retiring from baseball.

Following his playing days, Caruthers was an American League umpire in 1902 and 1903. He had earlier worked as a fill-in umpire in the National League in 1886 and 1891, and saw more regular work in 1893. He was later an ump in the Three-I League, a position he held at his death at age 47.