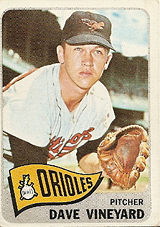 Dave Vineyard pitched in 19 games for the 1964 Baltimore Orioles, starting six of them. The Orioles went on to win 97 games that year. Dave was four years younger than teammate Brooks Robinson.

Dave also pitched nine years in the minors, of which parts of five were with the Rochester Red Wings. His record during seven seasons in AAA ball was 36-29.

Through 2019, he is the only major leaguer born in Clay, WV. He attended Spencer (WV) High School, a school that Kane Davis later attended. He began in the minors at age 18 in the Cleveland Indians organization, was then in the Orioles organization for the rest of his minor league career until the last year, when he played in the Boston Red Sox organization.

"The first-place BALTIMORE Orioles . . . also had luck with a new face. Dave Vineyard, a right-hander from Rochester, put the finishing touch on a glittering three-game run by Oriole pitchers with a two-hitter over the Senators." - Sports Illustrated, August 3, 1964 issue