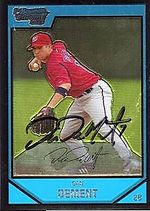 Dan DeMent spent parts of two seasons at AAA despite being undrafted out of college, then went into coaching.

DeMent signed with the Tampa Bay Devil Rays after finishing college and broke into the pro ranks on a strong note, hitting .301/.398/.485 with 48 runs in 60 games for the 2000 Princeton Devil Rays. He finished 8th in the Appalachian League in batting average. A shortstop-second baseman, he was named the Appy's All-Star DH, an honor he shared with Rafael Boitel. The player no one wanted to draft had tied for the league lead in runs as well.

In 2001, Dan split time between the Bakersfield Blaze (1 for 17, BB) and Charleston RiverDogs (.269/.326/.447). He played at least 20 games at second base, third base and the outfield and also appeared at shortstop. He smacked 11 triples yet was just 6-for-20 in steal attempts. The utility man led all Devil Rays farmhands in three-baggers, tied for 8th in the affiliated minors.