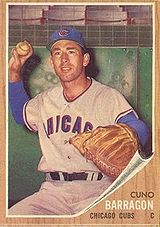 Cuno Barragan played three years in the major leagues. He cracked one career home run in his first career at bat on September 1, 1961, for the Chicago Cubs against Dick LeMay of the San Francisco Giants.

Barragan was with the Idaho Falls Russets in 1953, the Amarillo Gold Sox in 1956, the Sacramento Solons in 1957, 1959 and 1960, the Portland Beavers in 1958 and the Salt Lake City Bees in 1963. He had tried to avoid the draft by joining the Naval reserves in 1953, but missed too many meetings and as a result was inducted anyway, missing the 1954 and 1955 seasons. He served in the Navy but stayed at the base in San Diego and later in Alameda, CA, working for the post office and playing baseball for the base team. His last name is incorrectly spelled "Barragon" (with a final o) on his 1962 Topps baseball card - both front and back.