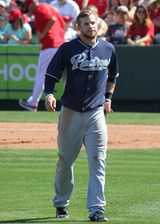 Cory Spangenberg was a top-10 first round draft pick in the 2011 amateur draft. His brother Ken Spangenberg has been a college coach.

Spangenberg hit .479 with 28 steals as a high school senior. At Virginia Military Institute, he batted .380 with 24 swipes in 2010 to win Big South Conference Freshman of the Year honors. Transferring to Indian River Community College, he hit .477, 6th in the nation, and was named Florida Junior College Player of the Year. The San Diego Padres took him 10th overall in the 2011 amateur draft, the second college infielder taken after Anthony Rendon. The scout was Willie Bosque, who also scouted San Diego's next pick, Michael Kelly. He then became the first first-rounder to sign a contract that year, coming to terms with the Padres on June 10th and visiting PETCO Park to take batting practice with the team and meet the press later that day. His signing bonus of $1.86 million was similar to that suggested by Major League Baseball for his draft slot. He began his minor league career with the Eugene Emeralds of the Northwest League. After 25 games, he was living up to hopes, at .384/.535/.545 with 31 walks, 20 runs and 20 RBI in 25 games. He was 10-for-14 in steal attempts.

In only his second major league game with the Padres, on September 2, 2014, he hit a pinch-hit walk-off home run off Brad Ziegler of the Arizona Diamondbacks to give his team a 2-1 win. he played 20 games for the Padres, hitting .290 with 2 homers and 9 RBIs while splitting time between third base, second base and the outfield. He made the Padres' roster in 2015 as a back-up player and on May 14th he had the first two-homer game of his career, connecting twice in an 8-3 win over the Washington Nationals.