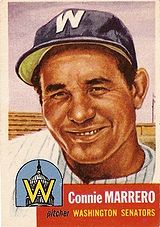 Connie Marrero, known as "El Guajiro" (the Hillbilly), was a Cuban who became a major league rookie at the age of 39. He pitched for five years, with decent ERA's until the last season. He threw many sliders, and one magazine called him "Slow Ball Señor".

Quote: "Nice play, Mickey. Now you pay." - Connie Marrero, after Mantle threw him out at first base on a ball hit to right field, and before Marrero struck out Mantle three times

Quote: "You got to swing at his first pitch. You let him get ahead of you on the count and you're dead." - Ted Williams, speaking about Connie Marrero

Different sources disagreed as to the age of Connie Marrero. Some said he was born in 1917, while others said 1911 or 1913. A Cuban passport issued to Marrero prior to the Cuban Revolution provides a birthdate of April 25, 1911 and that is considered the most likely date of birth.

After the death of Juan Delis in 2003, Marrero was the only former major leaguer living in Cuba. Marrero did not contribute to the major league pension plan and was not entitled to a pension despite playing the requisite five years in the big leagues. In 2012, he received his first installment from a fund established for major leaguers who were not vested in the pension plan.

Marrero lived with his grandson and great-grandchildren in Havana and followed both major league and Cuban baseball. While his eyesight was gone, he still had all of his mind and regularly impressed visitors with his complete recall of games that happened more than half a century earlier. On February 8, 2011, when Tony Malinosky passed away at age 101, he became the Oldest Living MLB Player. When he celebrated his 102nd birthday on April 25, 2013, he was only the second major leaguer to reach that age, after Chet Hoff­. He died almost exactly a year later, two days shy of his 103rd birthday.

The first Latino to throw a shutout in a Caribbean Series, he had a 2-2, 1.59 record in four Series and made the Caribbean Baseball Hall of Fame in 2015.