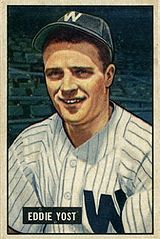 A much underrated ballplayer throughout his career who drew 100 or more walks in a season eight times, Eddie Yost has the most bases on balls of any eligible player not in the Hall of Fame. Although his career batting average was only .254, his uncanny ability to draw walks coined his nickname - enabling "The Walking Man" to have a lifetime on-base average of .394, comparable to Hall of Famers Rod Carew (.393) and Tony Gwynn (.388).

Yost broke into the majors at age 17.

After his playing career ended, Yost spent many seasons as a big league coach with the Los Angeles Angels, Washington Senators, New York Mets, and Boston Red Sox. He was also interim manager for one game with the Senators in 1963.

He is not to be confused with another player of a similar name, Eddie Joost, who also drew over 1,000 walks. Their careers overlapped and both played many years in the American League. In 1952, Yost was first in the league in walks, and Joost was second. The two are not, however, on each other's similarity scores. Yost had more career at-bats and hits, and had a higher batting average and on-base percentage.

Speaking with Brent Kelley in 1993, Yost was asked to name the players who'd really stood out during his 40 years in the game:

"Yogi, and all the Yankees, for that matter. But I saw Clemente when I was coaching for the Mets. I believe he was the best I saw." Brent Kelley: Baseball Stars of the 1950s: Interviews With All-Stars of the Game's Golden Era, McFarland, Jefferson, NC, 1993, p. 187

Talk about the grass being greener... Yost, clearly one of most selective hitters in the history of the game, when asked to name the best of the best, comes up with none other than arguably the two best – undisputably the two best-known – bad-ball hitters ever.

Eddie is one of three major leaguers named "Yost". Two of the three (Eddie and Ned Yost) were also managers.