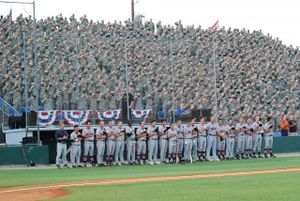 The Columbia Blowfish were a member of the Coastal Plain League. The Blowfish played their home games in Columbia, SC, at the historic Capital City Stadium, former home of the South Atlantic League's Capital City Bombers and professional teams dating back to the 1940s.

The Blowfish joined the CPL in 2006. They appeared in back-to-back Pettit Cup finals, winning in 2012 but losing the following year. They moved to Lexington, SC in 2015 to make way for the Columbia Fireflies of the South Atlantic League.

The Blowfish led the Coastal Plain League in attendance, drawing more that 46,000 fans. On July 11th, David Anderson a freshman at Coastal Carolina University pitched the first No-Hitter in Blowfish history. The Blowfish defeated the Wilmington Sharks 1-0. Anderson led the pitching staff with at 1.24 ERA, and finished as the team's top hitter with a .261 AVG and 19 RBIs