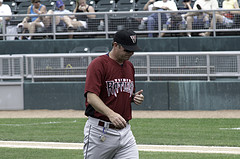 Chris Hook became the first member of the San Francisco Giants ever to win his first five decisions as a rookie pitcher.

In 2019, after almost two decades of working as a pitching coach in college and in the minor leagues, he was named pitching coach of the Milwaukee Brewers.