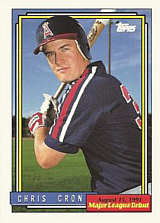 Chris Cron had a major league career of twelve games. A first baseman, he came up with the 1991 California Angels and batted .133 (2-for-15) in six games, followed by six games (0-for-10) with the 1992 Chicago White Sox. He had several good minor league seasons, particularly in Triple A, and hit .267 with 172 homers in a dozen seasons. Originally drafted by the Atlanta Braves in 1984, Cron homered in his final career at bat for the Nashville Sounds on June 8, 1995. He retired after the game and was named manager of the Bristol White Sox.

Since then, Cron has been a skipper for over a decade in the Chicago White Sox, Colorado Rockies, and Detroit Tigers organizations. He managed the Birmingham Barons in 2006 and the Great Falls White Sox/Great Falls Voyagers from 2007 to 2010. From 2011 to 2013, he was manager of the Erie SeaWolves. In 2014, Cron moved to the Arizona Diamondbacks organization as minor league hitting coordinator [1]. He remained the hitting coordinator though the 2018 season before opting to manage again in 2019. Cron was scheduled to manage Reno in 2020 before the season was cancelled due to COVID-19. In 2021, he was the Diamondbacks' minor league field coordinator. In 2022, he was named assistant hitting coach of the Oakland Athletics.

His son, C.J., is a veteran of nine big league seasons. Another son, Kevin, made his big league debut in 2019. Since Chris was managing Kevin at the time of his call up with the Triple A Reno Aces in the Arizona Diamondbacks chain, he got to inform Kevin that he was headed to the majors.