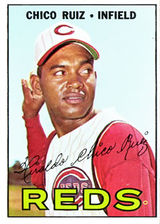 Chico Ruiz was involved in a celebrated dispute with Alex Johnson while both were teammates on the California Angels. Ruiz brought a gun to the clubhouse, and Johnson said Ruiz threatened him. Ruiz reportedly told Johnson that while "white guys" on the Angels disliked him, "I'm as black as you are, and I hate you! I hate you so much I could kill you!"

Ruiz died in a car accident in San Diego, CA.

One of the ironies of baseball is that a mediocre player like Ruiz would be be the answer to so many trivia questions. Here is one: who is the only player to pinch hit for both Pete Rose and Johnny Bench? With the Cincinnati Reds, Ruiz pinch hit for Rose on July 26, 1964 against the Pittsburgh Pirates, and for Bench on August 28, 1967 against the Philadelphia Phillies; it was Bench's first major league game.

He is remembered for a tremendous play in the heart of the 1964 pennant race, when he stole home with two outs in the 6th inning on September 21st to give the Reds a 1-0 win over the Philadelphia Phillies, in one of the Phillies' key losses in their memorable collapse that year. Most observers described it as a stupid or bonehead play, given slugger Frank Robinson was at the plate, but it worked because it caught the Phillies completely off-guard.