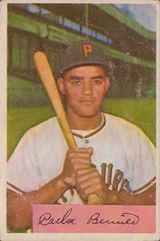 "Bernier had the ability to have a ten- to fifteen- year major league career. His temper got the best of him." - long-time minor leaguer Ron Samford, a teammate of Bernier in Puerto Rico and in the PCL

"I like being around people who remember the Stars' base-stealing Carlos Bernier, who had a temper as big as his chaw of tobacco." - long-time baseball writer John Schulian, writing in 2008

Carlos Bernier, arguably the first black player of the Pittsburgh Pirates, had over 300 at-bats in his only major league season with the team in 1953. Bernier also played more than a decade in the Pacific Coast League, mostly for the Hollywood Stars and Hawaii Islanders, and is a member of the Pacific Coast League Hall of Fame. In 1961 he hit .351 for Hawaii, and added 20 home runs, 95 walks and 22 stolen bases.

References differ as to whether Bernier or Curt Roberts was the first black player for the Pirates. Some say Bernier should be categorized as Puerto Rican rather than black, although various sources call him black or say he played on Negro teams. As one example, the book Crossing the Line: Black Major Leaguers 1947-59 has half a page on him. Similarily, the webpage Western Canada Baseball - Negro Leagues also lists him, clearly considering the ManDak League to be a Negro League.

Bernier was not the type to take racism lying down. He was competitive and aggressive on the ballfield, and some have speculated that led to his having a long minor league career with only the one opportunity at the major league level, even though he was consistently a star in the PCL. In 1954, he was suspended after slapping an umpire, and that did not help his image at all (nor did it help his team, as the Hollywood Stars were passed by the San Diego Padres down the stretch). Source: Carlos Bernier In 2004 he was elected to the Pacific Coast League Hall of Fame. The book Puerto Rico's Winter League says that some compared him to Ty Cobb in terms of temperament. He played nearly 20 years in Puerto Rico. When Rogers Hornsby was managing in Puerto Rico, he tried to acquire Bernier. When Bernier was in his last season in Puerto Rico, fans called him "vieja", "old woman", due to his age.

When Bernier played for the Pirates in 1953, he was in center field more than other positions. The most-used center fielder was Frank Thomas, who as a youngster was a center fielder but ended up playing most of his career at left field or third base. Interestingly, the book Clemente: The Passion and Grace of Baseball's Last Hero says that when Roberto Clemente got upset about racial stereotyping, Bernier was one of the players who urged him to stay under control. Bernier was not only noted for his temper. He was also called flamboyant, and thought of as one of the fastest players of his era.

Bernier fell on tough times late in life and was homeless near the end. He was found dead in a garage, the result of suicide by hanging.

A 1952 Hollywood Stars program featured a drawing of Bernier on the cover. Bernier cover