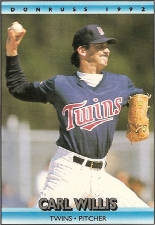 Carl Willis was a member of the World Champion Minnesota Twins in 1991. He appeared in 7 games in the postseason that year, getting no decisions, but giving up only 4 earned runs in 12 1/3 innings, giving up 8 hits, walking 2 and striking out 5. He did have one bad outing in Game 5 of the World Series, giving up 3 earned runs in 1 inning of work against the Atlanta Braves, but pitched well in his other appearances. He had 1 hit in 4 career at bats, a single on September 20, 1986 as a member of the Cincinnati Reds against the Los Angeles Dodgers. The opposing pitcher was Alejandro Pena. He pitched 3 2/3 scoreless innings in that game.

After elbow injuries ended his playing career, Willis spent several seasons as a minor league coach. He was the pitching coach for the Watertown Indians (1997), Burlington (NC) Indians (1998), Columbus RedStixx (1999), Akron Aeros (2000), and Buffalo Bisons (2001-2002). Willis became the Cleveland Indians pitching coach in 2003 and remained in the role through 2009. After leaving the Indians, he was named the minor league pitching coordinator of the Seattle Mariners, then on August 9, 2010, when manager Don Wakamatsu was fired along with three of his coaches, he replaced Rick Adair as the M's pitching coach, where he stayed through 2013. Willis returned to Cleveland as a special advisor to baseball operations in 2014. He started 2015 as the pitching coach for the Columbus Clippers. On May 9th, the Boston Red Sox hired him to take over as pitching coach from Juan Nieves. He stayed until the end of the 2017 season, when he was fired alongside manager John Farrell after the team's early exit from the Division Series.

Willis did not stay unemployed for long after being let go by Boston, as two weeks later, he was brought on board by the Indians to be their pitching coach for the second time in 2018, replacing Mickey Callaway who had just been hired by the New York Mets to be their new manager. As of 2021, Willis remains the Indians pitching coach.