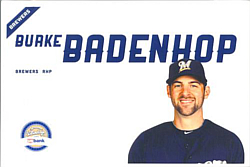 Burke Badenhop was selected by the Detroit Tigers in the 19th round of the 2005 amateur draft and made his pro debut that summer with the Oneonta Tigers, going 6-4 with a 2.92 ERA in 14 starts. The next year, he played for the West Michigan Whitecaps, where he went 14-3 with a 2.84 ERA in 27 starts. Badenhop spent most of 2007 with the Lakeland Tigers, with whom he was 10-6 with a 3.13 ERA in 23 starts, before being promoted to the Erie SeaWolves, where he went 2-0 with a 1.45 ERA in 3 appearances in the rotation. After the season, he was traded to the Florida Marlins, along with five other prospects, for Dontrelle Willis and Miguel Cabrera.

After one start with the Carolina Mudcats in 2008, Badenhop was recalled and made his big league debut April 9th, throwing a scoreless inning against the Washington Nationals. Badenhop was a valuable asset as he could start games, work in relief and close out games reliably. Between June 3rd and June 9th, Badenhop did one of each of those things over three consecutive appearances. Overall, he was 2-3, 6.08 in 13 games for the Marlins, losing time to an injury. He had a much more productive season in 2009, going 7-4, 3.75 in 35 games, while also spending time in the minors. In 2010, he was 2-5, 3.99 in 53 games, exclusively in relief; he recorded his first major league save that season, but once again spent time in Triple A, pitching 12 times for the New Orleans Zephyrs. He again started the following season in New Orleans, but was called up after making 11 appearances, even though his ERA was 6.75.

Pitching against the New York Mets in 2011, Badenhop made his first hit of the season count, driving in Mike Stanton with the winning run with a two-out 11th-inning single off Ryota Igarashi on May 16th, giving the Marlins a 2-1 win at Citi Field. Manager Edwin Rodriguez decided to let him hit as he was about to run out of pitchers; Badenhop was 1 for 23 for his career at that point. With the Marlins now ahead after Badenhop's unlikely hit, Rodriguez brought in closer Leo Nunez to pitch the bottom of the 11th, although Burke was credited with the win. He continued to pitch fairly well at the big league level, making 50 appearances out of the bullpen, with a record of 2-3, 4.10 and a save. On December 12th, he was traded to the Tampa Bay Rays in return for minor league catcher Jake Jefferies. He pitched 66 times for the Rays in 2012, putting up a record of 3-2, 3.03 in 62 1/3 innings while striking out 42 and walking only 12. Despite his success, the Rays traded him to the Milwaukee Brewers on December 1st in return for outfielder Raul Mondesi Jr. in what was seen as being primarily a cost-cutting move.

Badenhop spent the 2013 season with the Brewers, going 2-3, 3.47 with 1 save in 63 games. After the season, on November 22nd, he was traded to the Boston Red Sox in return for minor leaguer Luis Ortega. After a solid year in the BoSox bullpen, he closed his big league career with a season in Cincinnati in 2015. Following his career, he became a special assistant to the Arizona Diamondbacks general manager.