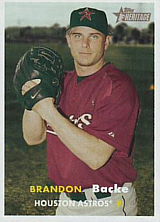 Pitcher Brandon Backe's career was cut short by injuries, first undergoing Tommy John surgery and then injuring his pitching shoulder after some memorable postseason performances. He enjoyed his best seasons as a starter with the Houston Astros.

After the Astros acquired him in a trade for Geoff Blum prior to the 2004 season, he began to blossom, going 5-3, 4.33 as a swingman his first season. He pitched extremely well in the postseason, after having been the winner on the last day of the season to get the team into the playoffs when he made an emergency start against the Colorado Rockies in place of an ill Roger Clemens. He won Game 3 of the NLDS against the Atlanta Braves on October 9th, giving up 2 runs in 6 innings, then made a pair of starts against the St. Louis Cardinals in the NLCS. He gave up 4 runs in 4 2/3 innings in Game 1 but was not involved in the decision in a game that was a true slugfest, ending 10-7 in the Cards' favor. In Game 5 on October 18th, he gave up only one hit in 8 scoreless innings - a single by Tony Womack - but left with the game still scoreless; Brad Lidge picked up the win when Jeff Kent hit a walk-off three-run homer off Jason Isringhausen in the bottom of the 9th.

Backe was a full-time starter in 2005, making 25 starts in 26 appearances and pitching 149 1/3 innings with a record of 10-8, 4.76. He pitched a scoreless inning in relief in Game 2 of the NLDS, again against the Braves, then was rocked for 5 runs in 4 1/3 innings in a start in Game 4; however, the Astros managed to win that game, 7-6, and moved on to the NLCS, where they again faced the Cardinals. He was very solid in a Game 4 start, giving up a run on two hits in 5 1/3 innings, and while he had a no-decision, Houston won the game, 2-1. He started Game 4 of the 2005 World Series on October 26th, with the Astros having already lost the first three contests against the Chicago White Sox. Backe was at his best once again, pitching 7 scoreless innings during which he gave up 5 hits, walked none and struck out 7 opponents. But once again, his teammates failed to score any runs and he was lifted for pinch-hitter Jeff Bagwell in the bottom of the 7th. The White Sox managed to score a run off Lidge in the 8th, and went on to win the game, 1-0, giving them their first championship since 1917.

Just when it seemed that Backe would emerge as one of the National League's top starters, he was set back by injuries. He made a number of stays on the disabled list in 2006, but pitched very well when he was healthy, going 3-2, 3.77 in his 8 starts. [ [2007 Astros|2007]]'s results were a carbon copy: he made only 5 starts, all of them in September, after having undergone Tommy John surgery the previous year, but was a solid 3-1, 3.77 when he was able to pitch. He was healthy in 2008 and made a career-high 31 starts for the Astros, but he had lost a lot of his stuff. The results were not good at all: he went 9-14 with a 6.05 ERA and led the NL in home runs and earned runs allowed, even though he only pitched 166 2/3 innings. Shoulder issues were the problem, and limited him to only 5 appearances in 2009. He had no decisions and a 10.38 ERA during these, making his final major league appearance on June 18th. He underwent surgery after that, but retired without ever again pitching professionally.

Since his retirement, Backe has been running a baseball academy in Alvin, TX. He got married and his first son was born in 2011. In 2014, he made the news as a police brutality case he had filed over an incident that allegedly took place in 2008 reached trial. He claimed that the police had used excessive force against him, causing an injury to his pitching arm and shortening his career. He was asking for $15 million in damages for revenues lost.