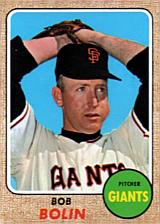 "I was never classified as a starter or as a reliever, so I mostly sat on a tarp between the bullpen and the dugout because I didn't know which one I'd be doing." - Bobby Bolin, from The Giants Encyclopedia, 1999

Bobby was signed in 1956 at age 17 by the New York Giants. He was very successful in the minors, going 15-9, then 10-8, then 20-8, and then 12-8 while working his way from Class D to AAA. Primarily coming on in relief in the bigs, he made his big league debut in 1961. He gradually saw more and more starts for the now San Francisco Giants, from 1964 to 1969. On August 14, 1964, he pitched a one-hitter against the Milwaukee Braves, with Ed Bailey getting the only hit for the Braves. The Giants, for their part, had only three hits that day - home runs by Hall of Fame sluggers Willie McCovey, Willie Mays and Orlando Cepeda.

Flipped to the Milwaukee Brewers after a 7-7, 4.43 campaign in 1969, Bobby made his final starts in 1970, struggling to a 5-11 record with a 4.91 ERA. He was dealt to Boston in September, where he finished his career over the next few seasons and recorded 15 saves, 7th best in the AL, in 1973. He did spend part of 1972 back in the minors, going 6-1 for Louisville. He was a teammate there of the 35-year-old Stan Williams as well as the young Roger Moret and Lynn McGlothen.

Bolin was pitching coach of the Birmingham Barons in 1986.