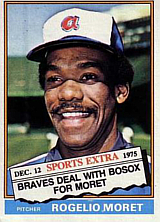 Roger Moret pitched nine years in the major leagues, and led the American League twice in winning percentage (or once, depending on the minimum number of decisions required to be considered the leader): he went 13-2 in 1973 and 14-3 in 1975, both year pitching for the Boston Red Sox. In both years, he started about half of his appearances. He was always considered on the verge of becoming a top-line major league starter, but he did not have the stamina to start regularly and was most effective as a swingman.

Moret was very tall and very skinny as a major league rookie, one of the youngest players in the league. He had started in professional baseball after high school, and compiled a 49-33 minor league record pitching for Winter Haven, Waterloo, Pawtucket and Louisville.

Before the start of a game against the Detroit Tigers on April 12, 1978, Moret was spotted in the Texas Rangers locker room in a catatonic state, with his arm extended holding a slipper. Obviously he did not pitch that day, and was immediately taken to a psychiatric facility and went on the disabled list. He only appeared in six more major league games after the bizarre incident.