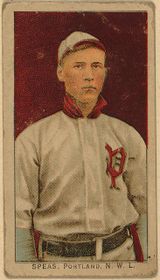 Outfielder Bill Speas played in the minor leagues from 1906 to 1927.

Speas began his professional career as an 18-year-old in 1906, suiting up for the Mansfield Giants of the Ohio-Pennsylvania League. He remained in that league until 1908, moving to the Pacific Coast League for the first time in 1909, playing for the Portland Beavers. Moving to the Northwestern League in 1911, Speas remained there until partway through the 1913 campaign, when he returned to Portland and the PCL, where he remained until 1916. He also spent part of 1916 with the PCL's San Francisco Seals. During the height of his career, Speas was considered one of the best fielders in the Pacific Coast League and was once said to have had the best throwing arm in the league.

He bounced around the Central League, Pacific Coast International League, PCL, Western Canada League and Western League from 1917 to 1921, finally settling down in the Mississippi Valley League, where he remained for the rest of his playing career, until 1927. It was in the Mississippi Valley League that Speas posted the best offensive statistics of his career. From 1921 to 1924, he never hit below .326, and in 1922 and 1923, he hit .382 and .363, respectively. He finished second in the league in batting average in 1922 (trailing Freddy Leach by only a single point) and he led the league in 1923. He led the Western Canada League with a .350 batting average in 1921, as well.

This page is in need of some additional content. Please help the Bullpen by expanding it, or learn how to contribute.
This biographical article is missing the person's: death date death place
Retrieved from "https://www.baseball-reference.com/bpv/index.php?title=Bill_Speas&oldid=1001006"
Categories: