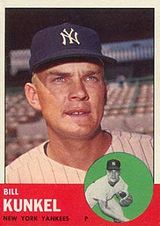 He pitched for the Kansas City Athletics and New York Yankees from 1961 to 1963. His most active year was 1961, when he appeared in 58 games for the A's. His son Jeff Kunkel was an infielder for eight years from 1984 to 1992 with the Texas Rangers and Chicago White Sox. His grandson Jeff Kunkel Jr. reached AAA then became a scout and minor league coach.

He retired after the 1965 season and turned to umpiring, reaching the American League in September, 1968. Kunkel was an umpire in the Florida State League in 1966 and the Southern League in 1967-1968.

It was Kunkel who discovered pitcher Rick Honeycutt doctoring the baseball with a tack wedged inside a Band-Aid on his right hand in a game in 1980. "I grabbed his hand and got stuck," Kunkel explained. Honeycutt received a ten-day suspension. Twice during his career, he took leaves from umpiring to undergo cancer surgery and twice he returned. He umpired in two World Series, in 1974 and 1980 and in the 1972 and 1977 All-Star Games, serving as home plate umpire in the latter.

During 1984 spring training, Kunkel's son Jeff, a member of the Texas Rangers, brought the lineup card to the plate the only time father and son have appeared in the same major league game as umpire and player. Shortly after his son Jeff was called up by the Rangers in July of that season, Bill Kunkel decided to retire as an umpire. He worked his last game on August 28th. He was the last of a breed, as no former Major League player has umpired a game since that day, even though the transition from player to umpire was very common until the 1950s.

He died shortly after his retirement, on May 4, 1985 at age 47, at Riverview Medical Center in Red Bank, NJ. He fell victim to the cancer he had fought valiantly and was cremated. He was survived by his wife Maxine, his sons Jeff and Kevin and his daughter Lisa.

Kunkel was also a college basketball referee for 20 years. (RTM).