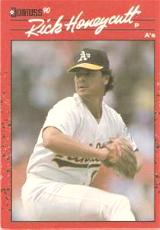 Honeycutt, born in Chattanooga, TN, attended the University of Tennessee at the same time as Mike Smithson. Smithson went in the 5th round of the 1976 amateur draft while Honeycutt went in the 17th round, selected by the Pittsburgh Pirates. The two would eventually be reunited as starters on the Texas Rangers in 1983.

Rick went 5-3 for the Niagara Falls Pirates in 1976 and then 10-6 for the Shreveport Captains in 1977. The Pirates made him the player to be named later in a trade to the Seattle Mariners in August, and he made his major league debut two days later, on August 24, 1977, a couple of months after he had turned 23 years of age.

Honeycutt spent four years with the Mariners, posting a losing record each year. To be fair to Rick, however, the Mariners were a new and unsuccessful team, losing far more games than they won. In 1979, Rick managed to go 11-12 on a team that went 67-95. On September 30, 1980, he was caught by umpire Bill Kunkel with a thumbtack in his glove after the Kansas City Royals' Willie Wilson had noticed something unusual. He was suspended for ten games and fined $500.

Rick was with the Dodgers from August 1983 to August 1987, appearing in post-season play in 1983 and 1985. His ERA in 1984 was sixth in the National League. He was traded in August 1987 for Tim Belcher, and thus came to the Oakland Athletics. Dave Stewart, for whom Rick had earlier been traded, was also on the Athletics.

By 1993 he was one of the oldest players in the American League. He signed with the Texas Rangers after the 1993 season, and after one year with them in 1994 he came back to the A's for 1995. He went 5-1 with the A's, and briefly appeared with the division-winning New York Yankees at the end of the season.

He was bought by the St. Louis Cardinals and played for them in 1996 and 1997 as the oldest player in the National League. In 1996 he made 65 appearances with a 2.85 ERA. He appeared eight times in post-season play with the Cards that year.

After his playing career ended, Rick was the Los Angeles Dodgers' minor league pitching coordinator from 2002 to 2005. He was named pitching coach of the Dodgers in 2006, staying until the end of the 2019 season.

A biography of Honeycutt at the Tennessee Sports Hall of Fame says that Rick grew up in northern Georgia and went to Lakeview High School where he played football, baseball and basketball. The baseball team was a state champion. In college he not only pitched well but was a top hitter. In his first professional game, he batted clean-up even though he was the pitcher, and he hit a home run in his first at-bat. He might have pitched in the majors even longer than he did except for elbow surgery at the age of 43. He moved back to Chattanooga in 1988 and eventually opened a large sporting goods store.

His 797 career major league appearances put him in the top 50 of all time when he retired, and he was still 49th all-time at the end of 2014.