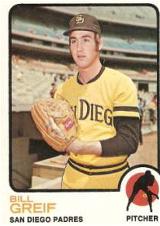 Bill Greif pitched six seasons in the majors, mostly for the San Diego Padres. He was a member of the starting staff from 1972 to 1974, however those seasons were mostly remarkable for his high total of losses: 16, 17 and 19. This was because he was one of the better and more durable pitchers on some pretty bad teams, and being a workhorse, he kept on piling up the losses. His best season was 1973, when his ERA was 3.20, good for an ERA+ of 108 and he recorded a career-high 10 wins, including 3 shutouts. In 1975 his 9 saves were tied with Danny Frisella for tops on the team. His 6 saves for the St. Louis Cardinals in 1976 were second on that staff.

Bill was selected by the Houston Astros in the 1968 amateur draft. His first major league victory was achieved for the Astros against the Padres in a 21-inning game on September 24, 1971. He entered the game in the 20th inning as the Astros pulled out a 2-1 triumph.

He had a fine strikeout pitch as evidenced by his 152 strikeouts in 137 innings for the Oklahoma City 89ers of the American Association in 1971.

Greif was the same age as teammates and pitchers J.R. Richard and Larry Yount on the Astros (he also pitched with them in the minors), and Al Hrabosky and Lynn McGlothen on the Cardinals. He was traded to the Montreal Expos before the 1977 season but failed to make the team in spring training and was released. He tried a comeback in the New York Mets orghanization in 1978 but gave it up after 3 games with the Tidewater Tides.

Bill received a degree in psychology (Phi Beta Kappa) from the University of Texas and a master's degree from Texas State University - San Marcos. After baseball he worked in real estate and was a real estate investor.