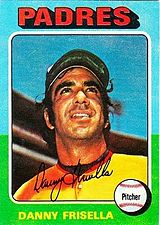 Danny Frisella had a ten-year career in the major leagues as a relief pitcher. Most of his career was spent with the New York Mets from 1967 to 1972.

He was killed in a dune buggy accident on January 1, 1977. Frisella would likely have gone on to pitch a number of more years. In his last season, he was the closer for the Milwaukee Brewers in 1976, leading the team with 9 saves and recording a 2.74 ERA. It was also the year that Hank Aaron finished his career in the majors with the Brewers.

According to the similarity scores method, the most similar player to Danny Frisella was his contemporary Vicente Romo.