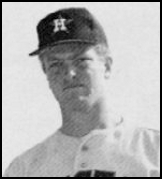 Larry Yount was a strong minor league pitcher in the early part of his career. His one appearance in the major leagues, for the 1971 Houston Astros, has a story behind it.

He has one of the stranger lines in the Baseball Encyclopedia. Yount was injured warming up on September 15, 1971. Since he was announced, he entered the game, but he did not throw a major league pitch. He was never recalled to the majors after that so he is listed with 1 game played but no batters faced.

Larry Yount did contribute to the family total for games. The Yount brothers played in 2857 games, 1 for Larry and 2856 for his brother, Hall of Famer Robin Yount.

His injury before his only major league appearance was preceded by a week with the military. It is not known whether he was in shape to pitch; but when offered the chance he couldn't say no. He didn't get a chance to pitch at the major league level during the rest of the year, and in spring training in 1972, he was one of the last players cut.

Later, in 1974, he was in the Milwaukee Brewers' spring training camp at the same time that his younger brother Robin was trying to make the team as an 18-year-old rookie.

He ended up with eight minor league seasons. After his playing days he became a real estate developer in Arizona.

His son Austin Yount made his pro debut in 2008, and another son Cody Yount was selected in the 2013 amateur draft. His nephew Dustin Yount also played professionally and his niece Mackenzie Vandergeest has played for the US women's team.