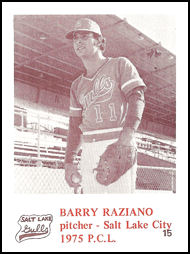 Barry Raziano was in 2 games with the Kansas City Royals in 1973 and 13 with the California Angels in 1974.

Barry was born in New Orleans, LA, went to high school in the same area at East Jefferson High School and attended Nicholls State University in the same state. At age 19 in 1967 he was pitching in A ball with the Greenville Mets, going 9-4 while starting 12 out of 26 games. He was in the Mets organization from 1966 to 1972, spending part of 1968 and all of 1970-1972 at the AAA level. Those three seasons, he was with the Tidewater Tides, sometimes mostly as a reliever and sometimes as a starter.

In February of 1973 he was traded to Kansas City and spent most of the season with their AAA affiliate, the Omaha Royals, for whom he pitched solely in relief. He came up with the major league team in August and appeared in two games, pitching a toal of five innings. He made his major league debut with the team a couple of weeks after a 20-year-old youngster named George Brett also made his big league debut.

In February of 1974 he was traded for Vada Pinson and appeared in 13 games with the Angels during June and early July of 1974. In his best stretch, from June 8th to June 14th, he pitched four times against three different teams, 6 2/3 innings total, and gave up no hits with only one walk. For the rest of the season he pitched for the Salt Lake City Angels, putting up a nice 2.25 ERA in 19 games.

He came back one last time, at age 30 in 1977, to pitch for his hometown team, the New Orleans Pelicans, who were in the St. Louis Cardinals organization that year.

After baseball he ran a construction company in Louisiana. [1]