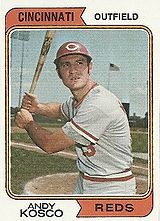 Signed by the Detroit Tigers in 1959, he came to the majors with the Minnesota Twins in 1965, the year they won the American League pennant with 102 victories. Kosco appeared in 23 games, mostly in right field, but did not appear in post-season play. He had had a great season in the minors that year with the Denver Bears.

After three years with the Twins, he became a regular with the New York Yankees in 1968, playing alongside Roy White and Joe Pepitone in the outfield. It was the heart of the second dead-ball era, and Kosco's .240 batting average was far above the Yankees' team average of .214.

In 1971, he was a regular outfielder with the Milwaukee Brewers, while in 1972 he played with both the California Angels and Boston Red Sox, where he was a couple of years younger than fellow outfielder Carl Yastrzemski.

He is the father of former minor league baseball players Bryn Kosco and Dru Kosco.

He studied law during off-seasons while in the majors, but after his baseball days went into insurance.

In 1975 he was interviewed for the Youngstown State University Oral History Program. interview