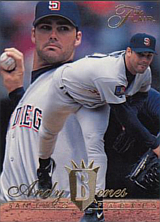 Andy Benes pitched for Team USA in the 1988 Baseball World Cup. He was 2-1 with a 3.92 ERA and struck out 22 in 20 2/3 innings while also walking 14 and allowing four home runs. He tied Charles Nagy, Yi-Hsin Chen and Rheal Cormier for 4th in the tournament in strikeouts. In the final game, he took the loss against Cuba, allowing three singles and a walk while only retiring one batter (on a sacrifice bunt). It was the closest Team USA came to beating a Cuban team in the finals of the Baseball World Cup from the late 1960s through the early 21st Century.

He was the first overall selection in the 1988 amateur draft. Armed with a sinking fastball and a slider, he was an All-Star in 1993 and the National League strikeout king of 1994 with the San Diego Padres. Andy finished third in National League Cy Young Award voting with an 18-10, 3.83 season in 1996 after joining the St. Louis Cardinals via free agency. After an abbreviated 1997, in which he was 10-7, 3.10 with 175 strikeouts in 177 innings, he attempted to re-sign with the Cards on a lucrative five-year, $30-million deal, only to do so after the deadline for free agents to return to their teams. Instead, he threw the first pitch in Arizona Diamondbacks history and hung around through 2002, finishing with a 155-139, 3.97 career record and exactly 2,000 career strikeouts.

Andy is the brother of former big league teammate Alan Benes (with the St. Louis Cardinals) and of Adam Benes, who never reached the majors. His son, Drew, was drafted by the Cincinnati Reds in the 47th round of the 2007 amateur draft.