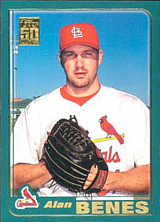 The brother of Andy Benes and minor leaguer Adam Benes, pitcher Alan Benes made his big league debut as a September call-up for the St. Louis Cardinals in 1995. In his rookie year of 1996, he won 13 games as a member of the Cards rotation. He won 9 games and posted a 2.89 ERA the next year, 1997, but a shoulder injury ended his season early. He returned to the majors in 1999 but was not the same pitcher. After his big league career ended, he pitched three more seasons in the Cardinals organization. After retiring as a player, Benes joined the Cardinals front office in 2007. In 2011, he was a pro scout for the Cards, a position he had held since at least 2008.