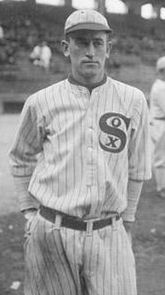 Zeb Terry, said to weigh only 129 lbs. as a player, played 7 seasons in the major leagues. He attended Stanford University from 1911-1914, and broke into the majors in 1916. He was the regular shortstop for the Chicago White Sox that year, when they won 89 games and finished second in the American League. The White Sox won the World Series the following year, but Zeb was in only 2 games with them.

Terry was purchased on option from the Los Angeles Angels by the Boston Braves in 1918 for $3,500 and given 105 at-bats. Rather than pay the $3,500, he was sent back to the Angels at the end of the season. When the 1918 Rule V Draft opened, Terry was drafted by the Pittsburgh Pirates. At the end of the draft period, the Braves drafted Terry (for $2,500, a potential savings of $1,000) and it was initially ruled that the Braves' draft cancelled the Pirates draft because Terry had played for the Braves. Eventually Chairman Garry Herrmann ruled that the Braves had relinquished rights to Terry by turning him back and that the Pirates' draft would stand. Terry then became a regular with the Pirates in 1919. He was the same age as teammate Casey Stengel, who also changed teams after the season.

Terry moved on to the Chicago Cubs in 1920, where he played about half his games at shortstop and half at second base. He was to play second base for the Cubs 1921 and 1922. Charlie Hollocher had been the Cubs' regular shortstop prior to 1920, shared playing time there with Terry that season, then regained the starting job at the position for several more years.

In his last season in the majors in 1922, Terry led the National League in sacrifice hits. He hit .286, but the team batting average that year was .293.

In the minors, he played several seasons for the Los Angeles Angels.