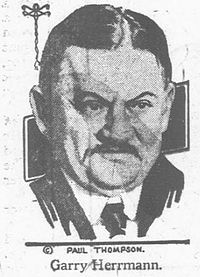 Garry Herrmann was a minority owner of the Cincinnati Reds who served as team president for twenty-five years. He also preformed the duties of the General Manager. He was the chair of the National Commission from its creation in 1903 until its final year, 1920.