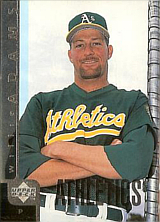 Willie Adams pitched briefly in the majors with the Oakland Athletics.

Adams was 1-0 despite a 9.45 ERA for the USA in the 1990 World Junior Championship, posting the US's highest ERA, but only two of the six pitchers with lower ERAs made the majors: Brooks Kieschnick (mainly a first baseman-outfielder) and Andrew Lorraine. Adams was 7-3 with a 4.14 ERA as a freshman at Stanford in 1991. In 1992, he improved to 8-3, 3.91 with a save, outperforming teammates Rick Helling and Lorraine, both future major leaguers. Adams made the Pac-10 All-Southern Division Team as one of two starting pitchers chosen. He spent the summer of 1992 with Team USA, going 1-1 with a 5.87 ERA in 11 games and pitched in the 1992 Olympics, allowing one run in 2 1/3 innings. Adams fell to 8-5, 4.23 his junior year at Stanford, allowing over a hit per inning. He was still drafted by the Oakland Athletics on June 3, in the first round (36th pick) of the amateur draft. He signed on July 21.

Adams appeared in 12 games for the A's in 1996, going 3-4 in 76 1/3rd innings with a 4.01 ERA. A number of solid starts earned Adams a chance at a permanent spot in the rotation in 1997, but he struggled early and was sent to Triple A in late May. Before being sent down, he was 3-5 in 13 appearances, pitching 58 1/3 innings with a frightening 8.18 ERA. Adams had trouble throwing strikes throughout his career, an unexplained malady that prevented him from becoming a reliever. Chronic shoulder problems eventually forced him out of Oakland's pitching plans. He primarily wore number 40. An unknown transaction placed Adams with the Boston Red Sox in 1999 and he would play in the minors for the remainder of his career. He last pitched with the Pawtucket Red Sox in 2000.