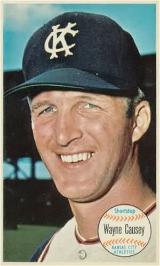 "Probably enough that I wouldn't have gone to work at a glass plant." - Wayne Causey, after being asked about the salaries of big leaguers now compared to his day and what a versatile infielder coming off a season hitting .280 would make

The Baltimore Orioles signed infielder Wayne Causey as an amateur free agent (Bonus Baby) on June 4, 1955. He remained on the teams's roster during the 1955-1956 seasons because of the bonus rule of the day. Playing in 50 to 60 games each year, he hit .186 in 263 total at bats. He was sent to the minors for a few years of seasoning once his mandatory apprenticeship was up, playing for the San Antonio Missions, Louisville Colonels and the Vancouver Mounties. He appeared in 440 games and hit .249 from 1957 through 1960. The Orioles of the mid-1950s replaced Hall of Fame third baseman George Kell with Hall of Fame third baseman Brooks Robinson, leaving no room at the inn for Wayne, who was traded to the Kansas City Athletics on January 24, 1961.

Causey emerged at shortstop for the 1961 team and put together a solid pair of back-to-back campaigns in 1963 and 1964, hitting .280 and .281. Bert Campaneris came along the next year and Causey moved on to the Chicago White Sox, the California Angels and Atlanta Braves before closing out his major league career with the Atlanta Braves in 1968. Arguably the pure definition of an average ballplayer, Causey hit .252 in 1,105 games. Most of his career was spent in the second deadball era, making him a better hitter than appears at first glance. He appeared in over 400 games at shortstop, over 300 at second base and another 200-plus at third base, fielding at a combined .966 clip.

Causey remained in baseball as a ticket manager and later a scouting supervisor in the southeast for the Kansas City Royals. In the mid-1970s, he returned to his hometown of Ruston, LA, where he was employed with the Ball-Incon Glass Company, eventually becoming plant manager.