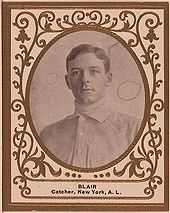 Walter Blair was a catcher who played seven years in the majors and managed briefly (two games).

Blair was at Bucknell at the same time as Christy Mathewson's brother Henry. But where Christy and Henry went to the New York Giants, Walter played for the New York Highlanders for most of his career. Both Blair and pitcher Rube Manning were purchased from Williamsport during the summer of 1907 by the Highlanders. They had been part of the championship Williamsport team in 1905. Blair also played in the minors for Newark, Rochester and Jersey City, and in 1916 was part-owner and player-manager for Harrisburg. He served as baseball coach at both Bucknell and the University of Pittsburgh.

One source: Bucknell Athletics Hall of Fame, which has a photo of Blair looking intelligent and collegiate.